In July 2014 we had so many big things to do for our project!  We went to camp four times as missionaries (read the post below about that). 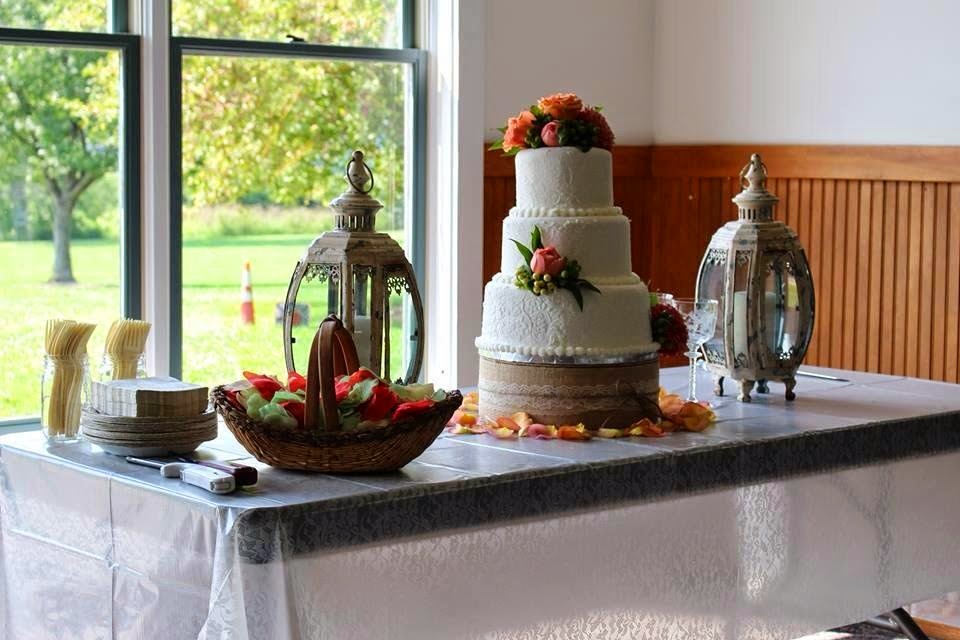 In all, we made 939 cupcakes for camp!  Right as camp ended, we had an order for a wedding cake for a teacher.  She had asked us to make her cake several months ago and we said that we would do it.  We were pretty nervous about this and asked everyone to pray for us.  Little did we know, that cake would take a LOT of prayer!
We started the cake several days before it was due, which is always a good idea when you have a big and important project because it gives you time to fix something if anything goes wrong.  (There is your spoiler alert right there…keep reading.)
For this wedding cake, the bride wanted a strawberry cutting cake.  First we made the cutting cake.   Then we made the serving cake.  We purposely did not frost those the same day we made them because sometimes baking the cakes makes it super humid in the kitchen.  Even though we had planned ahead like this, we still ended up with drama.  Keep reading.
The next day the thing we did first was that we frosted the “dummy cakes”.  These are made out of styrofoam and are useful in a 3 tier cake because they don’t weigh as much as a real cake.  (We did this with Abbey’s cake too, you can read about hers here.)  You make the cutting cake (which is at the bottom) out of real cake and you make a serving cake to give the guests.
Next, we frosted the cutting cake so we were ready to put fondant on all three cakes.  As I was doing that, Livvy started to frost the serving cake.  This is a big deal that she can do this now!  When we first started all this, she really had not done anything like this, so it is awesome that she is learning all these things too!
After the fondant was on the cakes, we finished the serving cake.  Instead of doing a bunch of small rosebuds like we did on Abbey’s cake, I made a design with white roses.  It is always a great feeling when a cake is finished!

Now we had to put the three layers together.  This is where the drama started.  We were all really worried about putting the dowel into the center of the cake to secure the layers and somehow, we were so worried about that part, we forgot the most important things that the chefs had taught us about putting in dowels to support the layers!  The whole time I was pounding in the dowel we were praying over the cake.  That was about the third time we had prayed over the cake at that point. The cake bounces when you pound in the dowel and I hate that part so much!  In fact, I had my mom pound it in for a little bit because I didn’t even want to watch it bounce!  No sooner did we have the dowel in than we realized that we had forgotten something very important…the bottom cake layer was starting to have the wrinkles!

At that moment it felt like our world was melting down around us.  Suddenly, we realized that we had a big problem and that this cake would not last for three days without caving in!  Livvy and I were so discouraged!  We had worked on the cakes since 9 am and it was now 3pm!  My mom called Sullivan and they told us to start all over with the bottom cake.  The new plan was to cut the cake off the dowel and then redo the whole bottom cake!  The only good thing was that we still had a day before the cake had to be given to the teacher!  We prayed over the cake and my mom left to go get more strawberry cake mix. I put a message on my Facebook page asking people to pray we could fix it!  Then,  Livvy and I went to watch a movie and calm down before we made the two more bottom layers! (our good friend, Bev, who was praying for us all through this drama because I was constantly texting her about all of this, came over and prayed with us over the cake!)

What we didn’t know at that time, is that mom was calling our other good friend, Denise.  (She is the kind lady that has made our logo and our website!)  Denise used to make cakes for a living and she and my mom and Bev are best friends.  So mom called to pray with Denise but Denise also gave my mom advice.  She told mom how we could actually save the cake!  So my mom came home with the three cake mixes just in case something went wrong, but she also came home with a tall vase and some small stones that look like marbles.  We prayed over the cake and we started to work on fixing it.  Carefully, we all three lifted the two top dummy cakes off the bottom layer and placed the dowel down into the marble-stones and rested it on the vase.  Then, we put the pvc pipes that we cut to 4″ pieces down into the cake layer really carefully. (This is the part that should have been done in the first place, before putting the dummy cakes on the real bottom cake layer).   Next, we re-smoothed the fondant and took out the wrinkles.  Then, we stenciled the bottom layer and finally we put the top back on.

We had a little mishap while putting the top two layers back on, and one of us put our thumb up and it made a belly-button in the middle layer.  At that point, we were just so relieved not to have to do the whole cake all over we decided to just tell the teacher that her cake had character!  We did send her a picture of it so she knew what she was getting into and she said she would deal with it.  (see the carefully placed flower picture below…you can’t even see the belly-button!)  It was about 8:30 pm when we finally finished but it looked awesome when we were done!
When the teacher’s fiancé came to pick up the cake, we were wearing our new shirts that had just came from Franklin Graham!  (He is the one that started Samaritan’s Purse and he had sent us a box with some things that all say Samaritan’s Purse on them.  We got the box just before the cake was picked up the next day…which was really super fun!)  We all did a huge victory dance in the kitchen and prayed and thanked the LORD for helping us make the cakes as the groom drove away with the cake!  (We also vowed that it will be a long time until we make another wedding cake!  They are a lot of work and a lot of pressure, but it was a great feeling to know that the teacher and her husband liked it!)