Hi Readers,
This is Gabe’s Mom writing today.  I asked Gabe to let me write to you and tell you a little history on my favorite cake-maker (Gabe The Cake Man).  He kindly agreed.  You see, as I was looking through the pictures of Gabe’s cake-making progress tonight for a project that Gabe is working on, all of a sudden I realized something amazing…GOD IS GROWING GABE!  I know, that is not earth shattering, but when I saw pictures of him in his earliest cake making days and then fast forwarded to what he got to do today, I was blown away.  Here, I’ll show you. 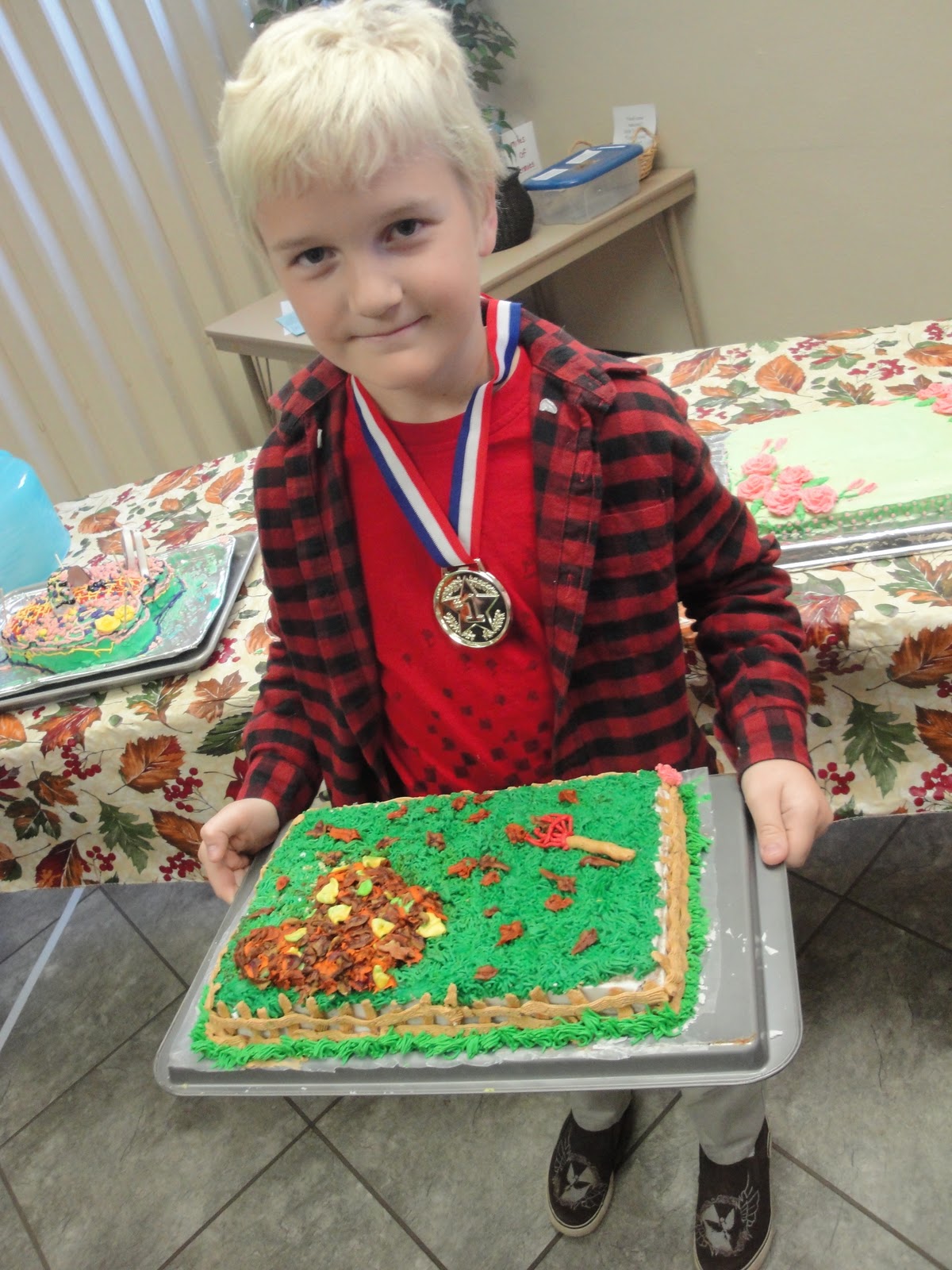 This was Gabe the day he “won” a contest in cake decorating.  He had completed one cake decorating class and he made this cake (buttercream frosting made to look like grass with a pile of fall leaves).  He was pretty proud of himself for winning first place, as he was the only boy in the class and was the youngest student in the class (he was only 10 at the time).  Never did we dream that God was growing a hobby that would become a vehicle for him to do something really big with God (and Livvy)!
The next picture I’ll show you is of him at Christmas time in 2012.  We gave our company party at Sullivan University’s Culinary school.  (This is a very fun party to do with your company, by the way!)  Gabe was fit to be tied to think that he was not invited, so Ben pulled a few strings and Gabe and Livvy got to go.  That was the day he met Chef Dodd (the administrator of Sullivan’s Culinary School).  Little did we know that God was giving Gabe a resource to help him with his big project!  Gabe and Chef Dodd hit it off right away.  Gabe had brought his book of cakes to show the chef.  I’m so glad that God didn’t let us know who Chef Dodd was ahead of time or we would have been too intimidated to let him bring the book to show the Chef the cakes.  Chef Dodd was so kind hearted and looked at all the cakes in Gabe’s portfolio.  He then asked Gabe if he would like to see the cakes he had made.  As it turned out, the cake he showed us was of Princess Ann’s wedding cake (Chef Dodd used to be the baker for the Queen of England!)  Here’s a picture of Gabe’s first meeting with the chef: 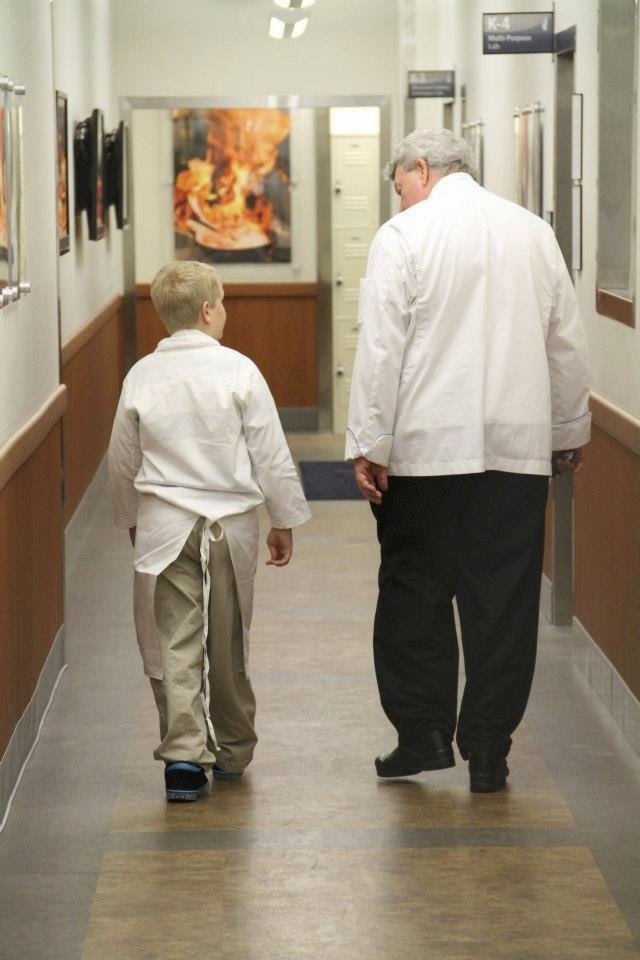 Fast forward to October 2013.  Gabe and Livvy got their hands on Gram’s Samaritan’s Purse catalog and decided to buy some chickens for an underprivileged family in a third world country.  Their tithe jars didn’t have the $14 they needed so they made cupcakes for our yard sale.  Their cuteness got them about double the needed money, so they decided to move up to the cost of a goat ($70).  When that was quickly achieved, they decided to try to buy medical supplies for $150.  About two days after wanting to raise that, Gabe came to me and said, “Mom, I think that Livvy and I can get the $150.   Since I’m pretty sure we can do it, I think it doesn’t take any faith.  We want to do something that requires a lot of faith.”  As it turns out, their idea of a project that only GOD could achieve was the $35,000 for a hospital.  My husband and I agreed that only GOD could do that – Gabe had a plan right from the start.  His plan was simple.  We would put up on our facebook walls that he would make a cake for anyone that would donate.
Fast forward to today.  He and Livvy are only $165 away from hitting $10,000 for the hospital.  So far they have made about 40 cakes and several hundred cupcakes for so many people.  They don’t get anything for their efforts other than the joy of watching their fundraising page that Samaritan’s Purse made for them show an incline in donations; yet they are so excited to see what God is doing!  A desire of Gabe’s heart since his sister got engaged in January has been to make her wedding cake.
Recently we met with Chef Dodd and two wonderful chefs that work at The Bakery.  Chef Dodd has kindly assigned these two wonderful women to work with Gabe at The Bakery to make Abbey’s wedding cake!  They are going to teach him how to stencil on a cake and how to make his own Royal Icing.  Gabe is almost delirious with anticipation of being able to use some of the tools and equipment at Sullivan.  It is amazing how God has not only been blessing the efforts of Gabe & Livvy in their fundraising efforts for HIS project, but here He is, giving Gabe the desire of his heart and is letting Gabe work with professional chefs to use his hobby/talent to make the cake for his sister’s wedding!  I think this proves a mantra I have.  I often say, “When we make God’s thing our thing, He is pleased to make our thing HIS thing!