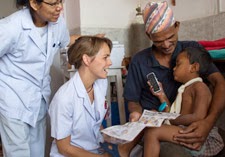 Here is a recent report that I did on Africa:

Africa is a world of poverty and we do not even realize it. As we moan over cleaning our large houses, many of the French-speaking people of Africa would cry tears of joy for having a real house to clean. Not only are the people of Africa in poverty, they are also in danger. There is a civil war going on there and they are living lives full of health issues such as Aids, cancer, pneumonia, infections and so many more. There  are 1.033 billion people in all of Africa and yet there are less then 500 hospitals in Africa; while there are more then 5,500 hospitals for the 313.9 million people in America. (Big difference is Africa has billions, we have millions)

People in Africa make a living by selling precious stones such as diamonds, but still that does not earn them much. The highest income rate for the average African is around $12,000 a year. The people in Africa do not seem to mind their dilemma though, and find joy in playing the world-renowned sport of soccer. While many people do enjoy playing soccer, 42% of all the African people have never opened a math, English, science or even an art text book.

The average family has about six children in their entire family, and yet they mostly prefer to have a boy instead of a girl. Girls require wedding money when they become of age, but boys can do lots of work and do not require the money. Sadly, the majority of orphans in Africa are girls. In Africa, 20% of all children born there, will die before the age of 5.  Many children die each year of a serious disease called, pneumonia. In America children rarely die of this because of the health care here. Although in Africa there was just recently a cure created, it is still not available to the public. For adults there is a more serious chance of death due to diseases such as: Hepatitis A, typhoid fever, and Aids. Sadly, there is no known cure for those diseases in Africa yet, but that is why I would like to build a hospital there, so that they could have the technology to treat these diseases. I am also happy that the hospital will be built by Samaritan’s purse because the people who go to the hospital will not only find medical help, but will also hear about God.