Skip to content
I recently entered a cake in the Kentucky state fair and won first place! The theme
Was money so I did a money tree. It had green fondant formed around a Styrofoam

Base and a small dowel in the middle to keep the tree up.

The inside of the trunk was formed by a peanut butter granola bar to give it shape and texture.

Once I had the base formed, I rolled chocolate fondant for the outside of the tree.

Around the base of the cake I made rocks out of fondant and stuck them on using royal icing which hardens really hard. Then I made the coins out of yellow fondant and cut them out using a dot tip. I soaked them in gold food coloring. Then I put them all around the cake.
I used a brick wall mold to shape the fondant for the dollar bill leaves. I rolled it out really thin and cut them out.  Then I used a food coloring  marker to make them look like money.

In order to stick the dollars to the branches I melted chocolate and stuck them on to the branches. The branches where made out of wire in the middle and chocolate fondant on the outside. And then the cake was all done but there was one more thing…we had to get it to the fair. While we were in the car to drop it off it was such a hot day that the chocolate that was keeping the branches and leaves up was starting to melt. But it was a good thing that we decided to put the cake in a laundry basket to carry it to the fair!  The sides were just right so I could rest my hands on it. 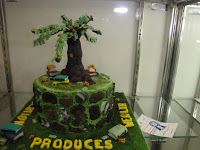 When the 18th came we were right  there at the fair and when we saw that blue ribbon, I knew it was all worth it.

I want to say a special “THANK YOU” to Mrs. Hack for teaching me how to do all these things.  I had not really used fondant before and she taught me how to do this.  She is a really good teacher and she makes amazing cakes!